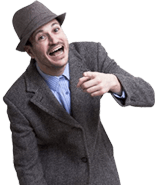 In our quest to bring laughter to the world and get you through the day, our expert humorists select a great joke of the day. Our most recent selections are archived for you here. Want them delivered straight to your e-mail each morning, just register and opt-in to our daily or weekly jokes.

There were three city mice sitting at a bar. The first mouse takes a shot of tequila, slams the glass on the table and says, "I'm the toughest mouse in this city. I'm so tough that I walk throughout the house collecting mouse poison, return to my nest and grind up the pellets with my morning coffee -- just for an extra jolt to start off each day." The mice look at each other.

The second mouse slams his whiskey --throws his glass on the floor and says, "I'm the toughest mouse in this city. I'm so tough that I go up to the trap outside my nest, I trip the lever and make the trap flip in the air, I catch the bar on its way down, bench press it a few times, twirl it over and over with my feet -- then I toss it to the floor, and take the cheese for breakfast. It's all part of my morning routine."

The third mouse looks at the other two. Bored with the conversation, he sets down his glass of beer and says..."I've had enough of you two. I'm going to go home and screw the cat!"

Q: What's the difference between a dog barking on the front porch and a woman hollering on the back porch?

A: If you let them both inside, the dog will stop barking.

I am from the Middle East and when I was a kid, I had a bomb sniffing dog. It died of an overdose.

Q: Why are redneck murder mysteries so hard to solve?

A: Because all the DNA samples match each other and there aren't any dental records.

Your mamma is so fat, when daddy told her to haul ass she had to make two trips!